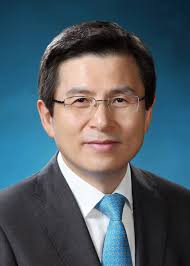 New leader of Liberty Korea Hwang Kyo-Ahn has not changed their fortunes.  Nothing much has changed in Korean opinion polling in the last few months. In the opinion polls Moon still has a approval rating of around 50%. His Democratic Party continues to lead in the polls although by 10-15 points rather than 20 point leads that were common at the start of the year.  What is interesting about this is the news has not been good for Moon in the last few months. Moon's main weakness has always been his failure to deliver on his (unrealistic) pledge to boost Korean growth. In fact Korea's economy shrank by 0.3% in the first quarter of 2019. Meanwhile the North Korean peace process has stalled- missile tests, attacks on Moon from Pyongyang and the Americans seizing North Korean ships suggest if anything the process is going backwards. Yet Moon still remains popular compared to past Korean presidents at this stage in their term while his party is on track for a big win in the 202
Post a Comment
Read more

Have Koreans stopped worrying and learned to love the bomb? 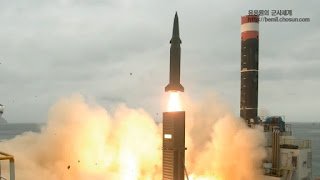 South Korea's Hyunmoo 2 missile.  What’s this? A piece in English on Korean public opinion that is good ! Please read it because this kind of behaviour needs encouraging. They find the attempts at a peace process are very popular though most South Koreans are sceptical that it will lead to North Korea giving up the bomb in line with other polling on the issue. It also provides yet another solid rejection of the idea South Koreans oppose the US-Korea alliance.   63% of South Koreans think something related to the US is the main reason the North has not launched a large scale stack on the South in the last 10 years (36% say the US-Korea alliance, 20% US troops being in South Korea,   7% the US nuclear umbrella.). The main bit of this post was going to add some caveats to the finding that South Koreans want nukes (albeit slightly less so than in the past). Luckily one of the authors of the piece has already done that on twitter
Post a Comment
Read more

Korea’s right on the rise? Nope

December 20, 2018
This piece annoyed me because it was such a load of nonsense. https://www.thedailybeast.com/south-koreas-right-wing-is-rising-and-could-scuttle-trumps-peace-with-kim-jong-un?ref=scroll He wandered round Daejeon and found some people who want to kill Kim Jeong-Un so now the ‘right’ (applying western terms to a country with very different politics is something I generally avoid but that’s what Kirk does) is in the ascendancy apparently. Never mind that in party preference they are 10-15% behind in the polls or that the talks with North Korea remain overwhelmingly popular.    In Daejeon Liberty Korea are polling around 25%*- around where they have been polling for the last year.  In the June 2018 Mayoral election, the Democrat got 56.4% of the vote beating Liberty Korea’s Park Seong-Hyo who got 32.2%. Liberty Korea are not on the rise in Daejeon or anywhere else.  Of course the Liberty Party may come back.  But it hasn't happened yet and no sign it is happening anytime s
Post a Comment
Read more

Only a half Moon- but still a blue wave 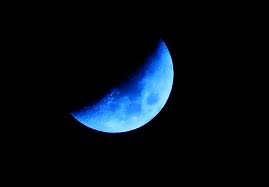 After a brief surge into the 60s President Moon’s approval rating has returned to around 50% as North Korea once again disappears from the headlines in South Korea. With Gallup he is rated at 53% ‘doing well’ 39% ‘doing badly’. Real Metre has him at 49% approval, 46% disapproval. Research View has him at 49% doing well and 47% doing badly. The party polling is as follows Gallup: Democrats 41% Liberty Korea 15% Justice 11% Righteous Future 7% Real Metre: Democrats 38% Liberty Korea 26%  Justice 8% Righteous Future 6% Research View: Democrats 39% Liberty Korea 20% Justice 10% Righteous Future 9% All of which looks at least comparable to the local election results earlier this year (Democrats 51% Liberty Korea 28% Justice Party 9% Rigteous Future 8% Other 3%). Moon is reasonably popular compared to past Presidents at this point in their terms. His predecessor Park Gun-Hye polled in the low 40s at this point in her presidency and before her Lee Myung Bak poll
Post a Comment
Read more 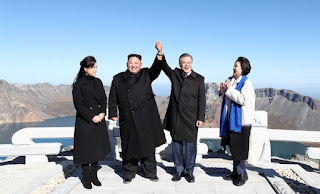 Ri Sol Ju, Kim Jeong Un, Moon Jae-in and Kim Jung-sook at Mt. Baekdu in North Korea.   Moon Jae-in was in Pyongyang last week for his third summit with Kim Jeong Un. Highlights included a trip to Mt Baekdu (pictured above) which is the highest point on the Korean peninsula and important in traditional Korean mythology and in the mythology of the ruling Kim family in North Korea. Moon also gave a speech at the May Day Stadium in Pyongyang. Moons approval rating has been falling quite sharply ever since the last summit which was followed by a stunning victory for the Democrats (Moon’s party) in the local elections in June. From a high of 79% in the first week of June Moon fell to 49% in the first week of September. He’s enjoyed a post summit bounce in the Gallup polls taking him up to 61% of people saying he is ‘doing well’ with 30% saying he is ‘doing badly.’ Realmeter show the same trend- Moon has reserved his downward trend and has gone up 9% in one week to an approval r
Post a Comment
Read more

July polling round up 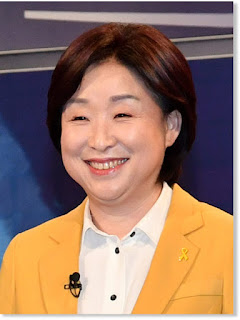 Sim Sang-jung Assembly member for Goyang A, and former presidential candidate for the Justice Party who have been enjoying a good few weeks in the polls.  Short version: Moon and the Democrats have had quite a massive chunk out of their ratings over the last month but were doing so well to start with they are still doing fine. The Democrats remain incredibly popular and Moon remains significantly more popular than his party. Moon’s very popular handling of the North Korea issue has been out of the news and voters minds and his still popular but nowhere as popular handling of the economy more prominent so Moon’s ratings and his parties are down a bit. Also a scandal around a lefty blogger who may or may not have had had ties to the Moon administration has been in the news a lot. Moon Jae in approval Real Meter has him at 62% approval 33% disapproval. This follows a quite sharp decline in his approval ratings and uptick in his disapproval since the local elections as s
Post a Comment
Read more

Belated Election Round Up 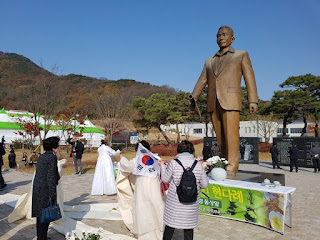 Even this place voted Democrat Wikipedia actually has a pretty good summary of the results in English and if you can read Hangul namu wiki has a better run down   so this will be pretty brief. Things that went as expected 1) Big victory for the Democrats. They got 51% of the vote nationally (tbh a bit less than I expected) with a 23% lead over the 2 nd place Liberty Korea party. They won 12 out of 13 national assembly special elections. Won all but 3 of the races for Governors and Metropolitan Mayors (basically the governors of big cities). They won 652 out of 824 of the seats in provincial assemblies and 1638 out of 2926 seats in county level elections (when rural, Liberty Korea supporting areas get more seats). It is the most convincing win in a Korean election since 1960. Even dictators who had complete control of the media, rigged the elections and had no intention of giving up power even if they somehow lost didn’t win by this much.   They even won in Gumi
Post a Comment
Read more
More posts

Links to things I read